Ladakh itself is considered an infrequent destination due to its remote nature and challenging terrain. But there are also several areas within Ladakh that are often called “eccentric Ladakh”. These are places that are not yet as famous as some others and do not receive as many tourists. One such place is the charming little village of Turtuk, located in Ladakh’s Nubra Valley. Along with the villages of Changmar and Bogdang, it is one of the newest areas of Ladakh to be open to tourism. The first set of tourists arrived here in the year 2010 and since then it has been a favorite destination among curious travelers.

Home to some 3,000 strange people, it is often known as India’s last rural idyll and is the last village on the Indian side of the India-Pakistan border. When you are in Turtuk, you are just a few steps away from the border, due to which tourism was not allowed here until 2010. This is a place that has seen and experienced the word “change” like no other in India. The people here were Indians until 1947; they were Pakistani for 24 years until 1971 and are now Indian again. Many of them have families across the border, faces they haven’t seen in decades.

In the shadow of the Siachen Glacier, these people live in one of the most sensitive areas in the world, yet it is probably one of the happiest places I have ever been. It is a place of stunning natural beauty and warm people who will welcome you with open arms. 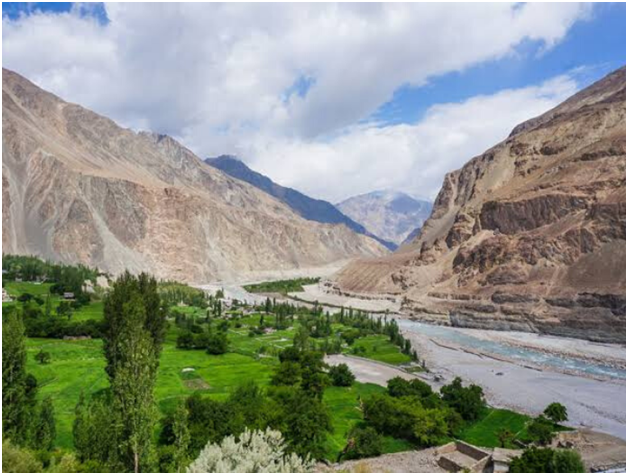 For a brief introduction, Turtuk is a small town located in Ladakh’s Nubra Valley, located at a distance of about 205 kilometers from the city of Leh. It is one of only 4 Balti villages under Indian administration; the other three are Tyakshi, Chalunkha and Thang. Turtuk is India’s last outpost at Thang, after which Pakistan-controlled Gilgit-Baltistan begins. It also serves as one of the gateway to the Siachen Glacier, due to which it was kept out of reach of non-local civilians. In 2010, to promote tourism in the region and connect people here with the rest of the country, tourists visiting Ladakh could travel to Turtuk and sometimes to Thang. In 2013, even foreigners were allowed to enter the village.

While the rest of Ladakh is a barren desert and a cold desert deprived of anything green, Turtuk is surrounded by verdant trees all around. Another contrast is in terms of its people. Ladakh is a mostly Buddhist region, while most of the people living in Turtuk are Balti Muslims. Turtuk is also famous for the various varieties of fruits that are grown here, especially apricots.

Before we continue to talk in detail about how you can plan a trip to Turtuk, let me provide a brief summary of the history of this place. Turtuk was claimed by Pakistan after the end of British rule in the 1947 Indo-Pakistani War, where it remained for the next 24 years until 1971. Under the command of Ladakh Scouts Major Chewang Rinchen, the area was recaptured by the Indian Army and annexed to India. So Major Rinchen received a Maha Vir Chakra, but the fight was far from over. Local people were confused by their loyalty because they had been Pakistani for 24 years, with some of them even serving in the Pakistani army. Many of them also have relatives living on the Control Line.

Due to all these factors and its proximity to the border, the valley has remained closed to visitors for the next 39 years. Things, however, slowly began to change. Ladakh saw a big boost in tourism, and Turtuk’s people, tired of their long isolation, petitioned for the remote but scenic valley to be opened to tourists. And this is how the history of tourism in Turtuk began.

Your regular ILP will also work in the village of Turtuk. You can obtain permission in person from SDM’s Leh office or apply for it online. 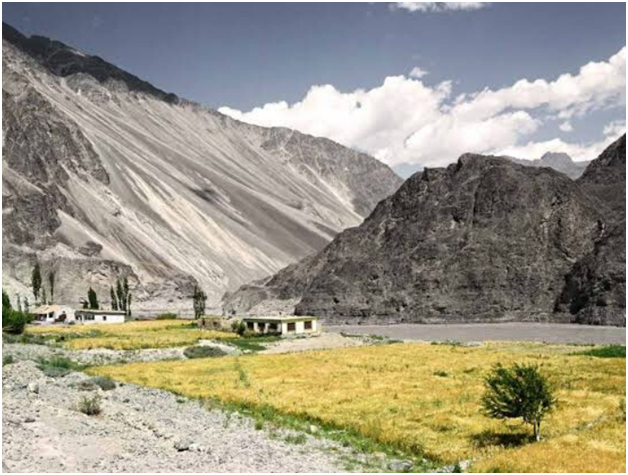 How to get to Turtuk

Turtuk is located in Ladakh; so to get there you first need to get to the city of Leh. If you are wondering how to get to Leh, I recommend you take a look at this article How to get to Ladakh. After arriving in Leh, you can travel to Turtuk using your own vehicle or public transportation. I will explain these two options.

How to get to Turtuk from Leh

Below is the route you will take from Leh city to Turtuk village, whether you are traveling by car or motorcycle; or a rental from the city of Leh. Whether or not you can complete this journey in one day depends entirely on how long you left Leh, your speed and intervals. But yes, it is definitely feasible and many people (including me) completed the journey on the same day.

How to get to Turtuk Village by Bus

The trip and route I explained above is what you will follow if you are driving your own vehicle to Turtuk. Let’s now take a look at how you will reach Turtuk if you are traveling by bus. Tourism in Ladakh is on the rise, but unfortunately the availability of public transport is not that great yet. To travel to a place like Turtuk by bus, you will need to combine your itinerary with bus schedules or the alternative solution if you cannot.

Bus from Leh to Turtuk

A bus to Turtuk leaves Leh every Saturday at 6am. The rate per person is Rs. 316. This bus will pass through Khardung La, Khardung, Khalsar, Diskit, Hunder and Thoise. If you have arrived in Khalsar, you can also use this bus to travel to Panamik. The problem, however, is that this bus is only once a week on Saturdays. Therefore, if you cannot plan your itinerary in a similar way, you cannot travel by bus.

How to get to Leh Turtuk by Taxi

Last but not least, let’s talk about how you can get from Turtuk from Leh City by taxi. A private taxi will be the most convenient, economical and comfortable way to travel, but it can cost a lot of money. If you were on a limited budget, another way to travel would be by shared taxis. Let me explain both.

If you rent a taxi to Turtuk, it will have to be a 2 day return trip. You cannot rent a taxi just for a ride back to Turtuk. Now, depending on the type of taxi chosen, the fare would be a total of Rs. 12,431 for taxis like Sumo, Qualis and Eco Van. If you rent a Scorpio, Safari or Tavera, it would cost Rs. 13,709. For taxis like Innova, Aria and XUV, the fare would increase to Rs. 14,431.

Turtuk is a small village and you can cover everything on foot in less than half an hour. Local transportation within the villa is not required. A daily bus leaves Turtuk around noon for Diskit and Hunder which you will board to leave the village. The best way to explore the small village is on foot. 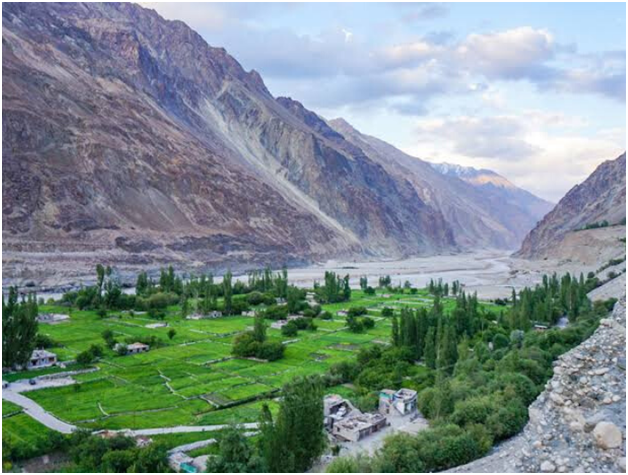 How to get to Turtuk in Winter

During winter, the only way to get to Turtuk is by private taxi. Roads to Leh City from Manali or Srinagar remain closed in winter so you cannot travel by car. You will have to take a flight to Leh City and from there rent a private taxi to visit Turtuk.

Where to stay in Turtuk

Now that you know how you can get to Turtuk, let’s talk about accommodation options in Turtuk. The reason residents filed a petition to allow tourists to enter their village was that they also wanted to benefit from increased tourism in Ladakh. It seemed unfair that people in the villages, less than 100 kilometers away, lived with dignity of tourism, while the residents of Turtuk had nothing to rely on except agriculture. So yes, after tourism in Ladakh was allowed, they made arrangements for people to stay in their little piece of heaven.

There are no hotels in Turtuk and so; I mean the big luxury ones. For accommodation in Turtuk, you will have to choose hostels, residences or camping. There are several inns and home stays available here.

The second time I visited there, I stayed at Maha Guest House because Sher Khan was not in the village and his house was locked. However, I enjoyed my stay at Maha Guest House equally. They have a small cafe in the garden which is very beautiful and quiet. The rooms are comfortable and cozy and the restaurant is decorated with thriving sunflower plants; providing a good environment. The food was pretty decent and their apricot pancakes were truly amazing. It is located at the top of the village and will cost around Rs. 500 – Rs. 700 a day. 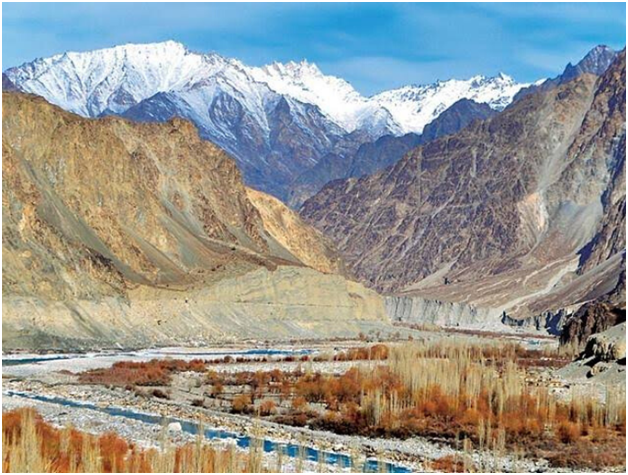 During my last visit, I noticed two camps in Turtuk; one by the name of Buckwheat Root Camp and another called Turtuk Holiday Resort. I checked the buckwheat root camp and they have nice tent accommodation. It belongs to a gentleman named Ali. I didn’t stay with him because he was looking forward to a homestay, but he still spoke to me in a very friendly way and offered a cup of tea. The other campsite, Turtuk Holiday Resort is also comfortable. As I haven’t stayed in any of them, I can’t really comment on the quality of the food here. Expect the price here to be around Rs. 3000 – 4000 per day.

Camping is an option in Turtuk, but not in the middle of anywhere. If you were carrying your own camping gear, you will need to talk to a local resident and pay a little so that you can set up your tent.

Things to do in Turtuk

Apart from visiting all the above mentioned places, there is little else to do in Turtuk. But to be honest, you don’t come to a place like this to do anything. Before, in my opinion, it is the exact opposite. When I’m in a small village like Turtuk, in the middle of nowhere, I would like to spend my time sitting ideally and doing nothing. But if you want to be part of something different, we have listed below some experiences you might have in Turtuk.

Things to do in Turtuk 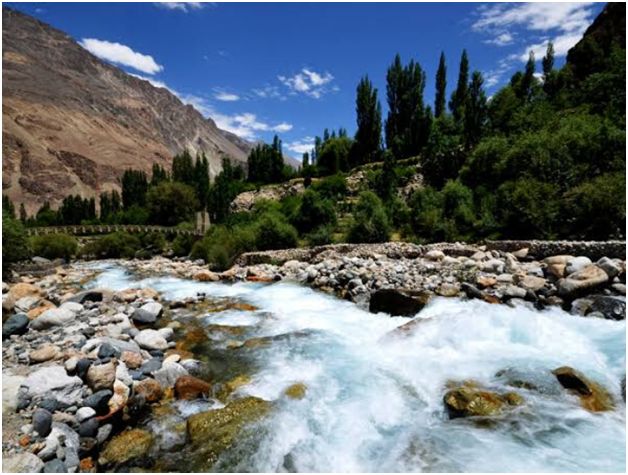 What to see in Turtuk

The natural beauty of the place is what you are looking for in Turtuk. The tranquility and calm of this region is something that city people like us almost never experience and this is the main attraction of this small village. It is practically a place that is stationary in time. Spend a day in Turtuk, and trust me when I say that. You will feel and live every hour of the day. Time here does not rush to buy. You will feel the clock ticking and the day moving slowly at its own pace. Some places are:

Being a cold desert, Turtuk’s climate remains cold all year round. Even during the months of May, June and July, the maximum temperature experienced will not exceed 20 degrees Celsius. The whole region is in a rain-shaded area, which means it should not receive any rain. But thanks to global warming, it rains here now in July and sometimes a lot. Winters here are, however, very severe. During January and February, temperatures can reach -10 to -15 degrees Celsius. It snows a little in Turtuk during the winter and sometimes the road through Khardung La can also be blocked. 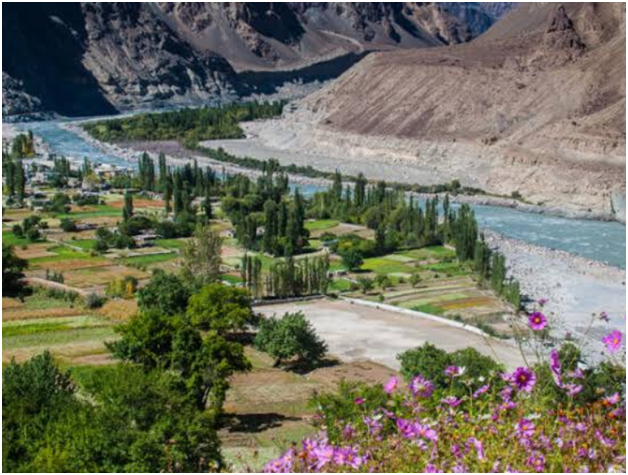